An oldy but a goody at Old Theletra 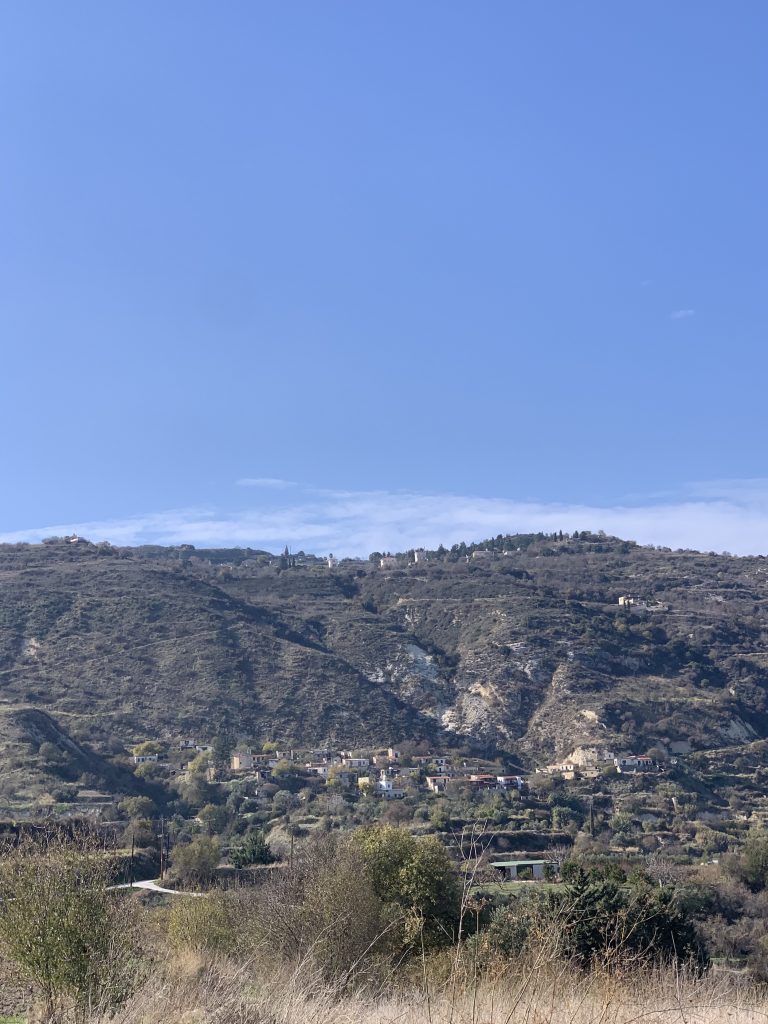 Let’s take a journey to Old Theletra. It is just wonderful. Theletra is a small village located in the region of Paphos that was relocated about 40 years ago. The new Theletra is now up the cliff on a small plateau literally up the road from the old version. Records are a bit thin on the ground but legend has it that due to earthquakes and the risk of subsidence, old Theletra was deemed unsafe so everyone upped bricks and mortar and climbed up. I have seen the sign to Theletra many a time and my friend recently pointed out the old village and said it was abandoned. Well that piqued my interest. I love an old, abandoned, possibly haunted (in daylight…way too scared to meet a ghost at night) building/area.

You have options to get there. If you have a car then from Paphos take the B7 to a Polis. In about 30 mins you will reach the outskirts of Giolou. Look out for the bit of broken road…supposedly fixed a couple of years ago, guess what happened in the winter after? Remind me not use those builders! But it does explain the subsidence risk in the area. Just after you have expertly driven around the new bends (unless you want to be Cypriot and just drive in a straight line), the turning to Theletra will be on your right. It is signposted on your left but the road is pretty much single track, although some is paved, so keep your eyes peeled! If coming from Polis, then the turning is on your left. You can also approach it via the farm tracks from Milou (which I hope to walk in the not to distant future) and also from above. New Theletra links to the Kathikas to Stroumbi road which is off the old Paphos to Polis road via Coral Bay. I haven’t been this way but if you follow the turning to Stroumbi from Kathikas and then follow the turning to Theletra, you will find it! If you are on foot then you have more fun! You get to take the bus, the 645, which runs between Paphos and Polis. Generally running every hour, the bus follows the B7 as described above. You will need to get off in Giolou (you can ask the bus driver to give you a shout out) and then just walk up to the turning. Follow the road (unfortunately its not made of yellow brick) for maybe 1.5km and you will end up in old Theletra. If you are a photo junky like me, it may take some time!

Before you even get to old Theletra, you get these magical beauties lining the path. I was so excited, I thought I had found diamonds. Unfortunately for me and my bank balance, its gypsum, but boy is it pretty! I collected a bit to take with me. I do like to collect mementoes from where I explore; whether it be a stone, a shell, volcanic rock, turtle shell or gypsum! I am especially fond of heart shaped ones and have a collection of different ones! Back to gypsum…gypsum is used in building materials and also dissolves really easily in water hence the moving. It is also shiny and reflects the sunlight. I fell in love a little bit! I also found a giant chunk of marble but I couldn’t lift it to take home! Would have looked great on a kitchen island or new dining table! Definitely won’t be submitting an application for world’s strongest woman any time soon!

The walk to Old Theletra takes you down a single track, through farm land. Its edged by cliffs of stone, gypsum and marble. It will take you over the gorge, which I couldn’t see any water in. The cliffs give way to lovely greenery in parts with sneaky pics of ruined buildings.

Baby its Cold Outside in Latchi