I’m dreaming of a white January?! 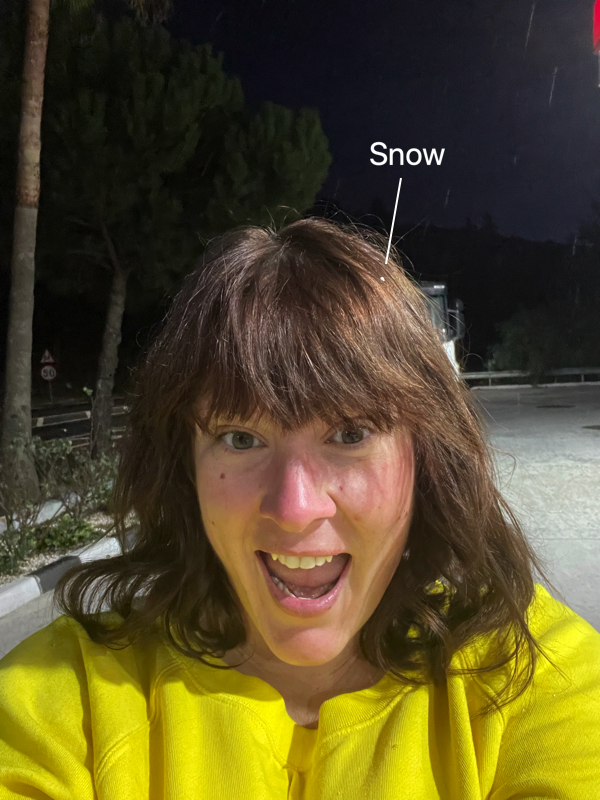 This past week it snowed…yes snowed in Giolou, Strombi, Tsada, Argaka, Skoulli, Droushia; and those are just the places I know about first hand. I remember snow here 5 years ago so I guess you could say it was an unusual occurrence! Look at all the snow streaks below!!!

Snow isn’t unheard of in Cyprus…you can ski in the Troodos (and swim in the same day in Limassol). But the Troodos’ highest peak is nearly 2000m above sea level, slightly more than Argaka’s 96m, Giolou’s 305m and Tsada’s 612m above sea level! January is not even the coldest month in Cyprus (although I think that’s been disproven this last week!) with average temps about 7-8 celsius minimum and 16-18 celsius maximum on the coast. When a cold front comes in however and there is a bitter wind, the temperature can drop and feel 2/3 degrees (this is when body parts start freezing and dropping off ha). For full details of Jan 22 so far, take a look at the Pafos Airport data from the Department of Meteorology for Cyprus. There isn’t a central weather station as such in the Akamas, so Pafos Airport is the best I can do!

The closest time and date weather info can be seen below for the Akamas and for Polis. It is for Jan 23rd, taken at 17:50.

From what I can gather, the coldest temperature ever recorded in Cyprus was a chilly -16 degrees celsius. I presume this was in the Troodos but I can’t seem to find out when! In the 1960’s, three years have been recorded as the lowest mean temperature in the last 62 years! In recent times, Paphos has hit -2 (eeek!) Today, the sea temp is about 17.5 degrees and very rough but the temp is expected to drop in the next 10 days (anyone getting their speedos out?!).

For more info on Jan weather take a look at this link and you can see the Jan weather from 2016 to 2021! If I’m honest, I have now found my new 2nd favourite website (obviously LoveAkamas is the best and my fav ha). Take a look at the website for the Meteorology Department of Cyprus it is fascinating! Graphs, tables, weather reports that include Polis and the Akamas.

So what can you do in this weather other than drive to the Troodos in a 4×4…sit in a cafe, drink hot chocolate (or a cheeky mimosa), eat cake and watch the world go by (under cover obviously). Where can I do this I hear you ask…In Polis head to Saddles or Central Point. In Latchi go to Molos and sit inside by the fire and eat home made apple pie or go to Coffee Island. I am a very big fan of their coffee…it sits in my espresso maker at home. In the Argaka area, head to Marianna’s and Marinos’ garden centre. In Giolou , there is Coffee Rooster on the right (heading towards Pafos) where chickens and bunnies used to live (it wasn’t a cafe then). In Peyia, although it’s small, go to Banana Tree Coffee. I also love the Cafe Me in the Chloraka area…it’s a vintage bus with undercover seating outside!

If anyone has any snowy pics from the Akamas area or wet pics feel free to post them on the fb page with the tag #janweatherakamas. Can’t wait to see them!

Beach side paradise: No. 9